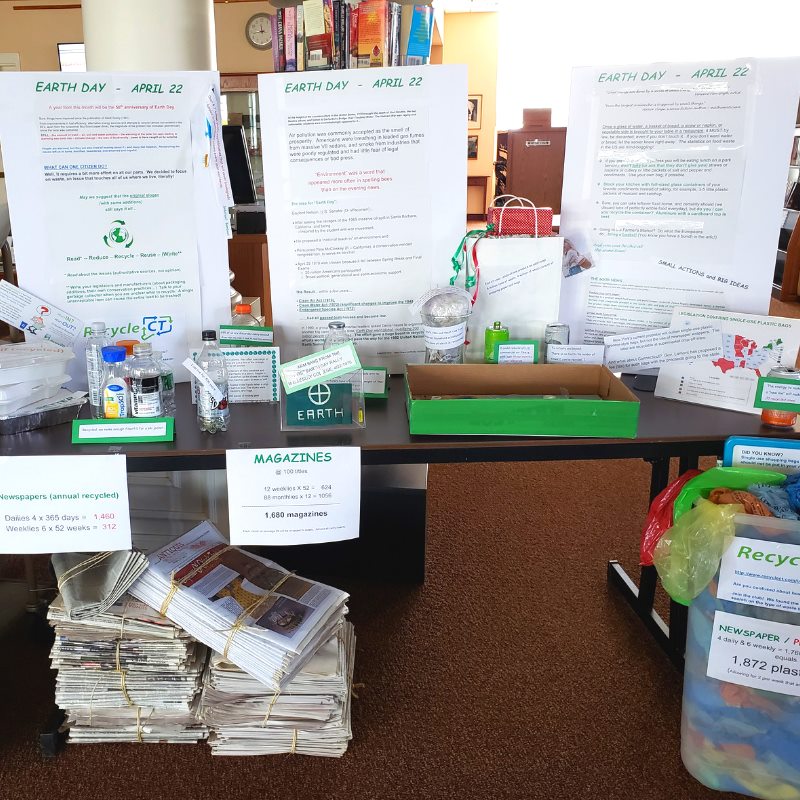 Earth Day was on Monday, April 22 this year. Our display on the first floor near the circulation desk provides visitors with tips and encouragement for Going Green.

One year shy of the 50th anniversary of Earth Day and there’s very little good news to report. One staff member attended that first rally, and still has the green armband to prove it.

The Earth Day exhibit in our lobby is meant to startle. Among the thirty days-worth of newspapers displayed are the plastic bags they come in – one big bin-full. In a single year, we receive / recycle 1,772 newspapers, which come in 1,872 plastic bags (factoring in approximately two double-bagged ones per week) and 1,680 magazines.

To round-out the display, we added 3 months-worth of plastic wrap* made into a ball, and all the non-recyclable pull-tabs and safety caps and clear hard-plastic collars from sour cream containers, etc. from a single two-person household!
*The amount of plastic wrap discarded in the US in a single year could shrink-wrap Texas.

The origins of Earth Day are almost incredible. Gaylord Nelson, U.S. Senator (D- Wisconsin) proposed a teach-in on a subject that had been gaining notice steadily since the publication of Rachel Carson’s Silent Spring in 1962. He persuaded Pete McCloskey (R – California), a conservation-minded congressman, to serve as co-chair, and so Earth Day (meant as a sort of “teach-in”) was born. Its date was determined by the timing of Spring Break and Final Exams in 1970. Twenty million Americans from all political, socio-economic and generational strata participated.

The Result…within a few years…

…had all passed both houses and become law. But there is still a long way to go.